Donna Dabler had a question about life of the Mansion staff and all the cleaning that went on.

The Mansion was not run like many Victorian era homes. They had paid staff who generally lived locally as opposed to live-in servants working for room and board. Many wealthy families had between 15 and 30 servants, depending upon how many children they had and how elaborate the grounds were. The Hegelers had between 8 and 12 staff, and the Carus family had even fewer.

There is a staff staircase which leads from the Ground Floor to the Kitchen (which is on the Main Floor, again a rarity) but it never went higher. The family had house staff like maids-of-all-work and a head housekeeper, at least one gardener, a couple of laundresses, a dressmaker, a driver, and some kitchen staff. They had a nanny at times, and at least one tutor, maybe two. We’re not certain if there was a Butler and a footman or if they were one and the same person.

As evidenced by letters we have, the staff were exceptionally well cared for, being given “no interest” housing loans, medical benefits, educational opportunities, and more. Many stayed in the employ of the families for decades.

Cleaning a place as big as the Mansion must have been a mammoth undertaking, what with dusting the book, washing light crystals and blackleading (rubbing and polishing with black lead paste) the stove and rubbing oils and beeswax into the floors and keeping the front stairs swept and turning the bedding, etc. Staff had other duties such as keeping the fireplaces going during the winter months (there are ten), polishing the silver, and answering the bell for visitors and tradesmen alike.

The stove is a story by itself. It’s from 1888 and weighs almost a ton. Originally it was a wood and coal burning stove with 10 top burners, a water reservoir and duel ovens. It has been refitted to 4 gas burners and duel electric ovens. The water reservoir is gone. It is sitting on its original zinc footing and under the original zinc hood.

Laundry was a literal nightmare until the 1870s. Clothes needed to be soaked, stains scrubbed out, soaped, agitated (by hand with a possing stick), starched, blued (a whitening agent), soaked again, wrung out, turned through a mangle, hung to dry, ironed, and finally put away. Unless, of course, something needed mending. The process took several days and while they may not have had as many outfits as we do, each dress consisted of yards of fabric.

And how did staff know that a member of the family wanted them? There is a call box in the kitchen. To find out how that works, you’ll need to come and take a tour sometime. 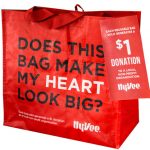 During the month of November, each time a customer purchases a $2.50 red “My Heart” Reusable Bag at our Peru Hy-Vee, the Hegeler Carus Foundaton will receive a $1 donaton (unless otherwise directed by the Giving Tag).

There are no upcoming events at this time.